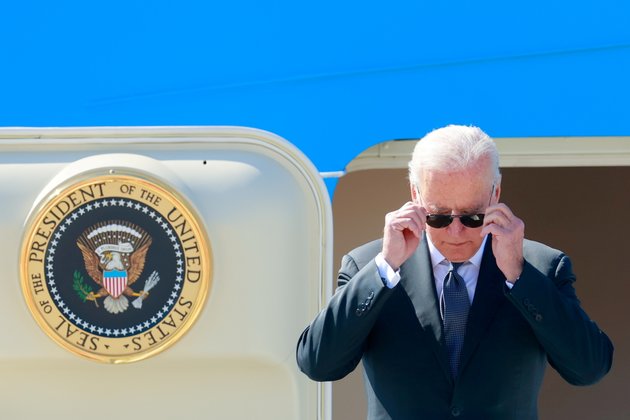 Biden in Geneva Ahead of Talks with Putin

U.S. President Joe Biden meets with his Russian counterpart Vladimir Putin for the first time Wednesday in Geneva amid deteriorating relations between the world powers.

The meeting takes place in the final hours of Biden's first trip abroad as president during which he has already attended the 47th G-7 summit in the English city of Cornwall, as well as talks with NATO and EU leaders in Brussels.

"I'm always ready," Biden said Tuesday in response to a reporter's question about the meeting shortly after his arrival in Geneva.

An armored vehicle and a truck block roadway access to the Inter Continental hotel before the arrival of U.S. President Joe Biden, in Geneva, Switzerland, June 15, 2021.

The White House said Saturday that Biden would appear alone at a post-summit news conference, unlike former President Donald Trump who addressed reporters together with Putin following their 2018 summit in Helsinki.

At that time, Trump contradicted his own intelligence agencies by saying he had no reason to doubt Putin's assertion that Russia did not meddle in the 2016 U.S. presidential election.

"A solo press conference is the appropriate format to clearly communicate with the free press the topics that were raised in the meeting - both in terms of areas where we may agree and in areas where we have significant concerns," a White House official said Saturday.

Regarding expectations, a senior U.S. official told reporters Tuesday that Biden would elaborate.

"We were going to let him speak to that when he concludes the meeting tomorrow. And the president will make clear that if we see significant types of cyber activity like we did with SolarWinds, he will respond like we did for SolarWinds."

In May, two key U.S. businesses - Colonial Pipeline, which transports fuel in the southeastern U.S., and the JBS meat production company - were targeted in cyberattacks believed to have originated in Russia. Both Colonial and JBS paid millions of dollars in ransom demands to restore their business operations, although U.S. law enforcement officials have recovered some of the money Colonial paid.

FILE - An Out of Service bag covers a gas pump as cars line up at a Circle K gas station near uptown Charlotte, North Carolina, May 11, 2021, following a ransomware attack that shut down the Colonial Pipeline, a major East Coast gasoline provider.

The White House also said it expects the Biden-Putin meeting "to be candid and straightforward" and that Biden will bring up ransomware attacks originating in Russia, the Kremlin's aggression toward Ukraine, the imprisonment of dissidents and other issues.

"Ransomware will be a significant topic of conversation," a senior U.S. official said Tuesday. "They will also discuss the broader issue of cyber norms, cyber rules of the road tomorrow in the discussion."

The two leaders are also expected to cover strategic nuclear stability and souring relations between Russia and the West.