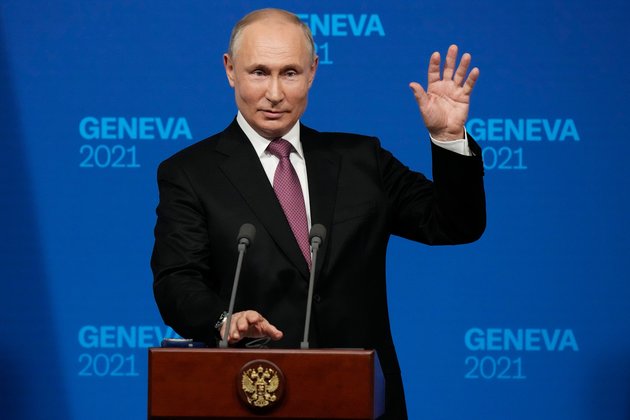 GENEVA - U.S. President Joe Biden and Russian counterpart Vladimir Putin have ended their summit in Geneva, chosen as a location for the talks for its history of political neutrality.

In a press conference after the summit, Putin, speaking through an interpreter, described the meeting as "constructive" and said there were "no hostilities," calling the U.S. leader a "constructive person, well balanced and experienced, a seasoned politician."

Putin said that in a bid to lower tensions, he and Biden agreed to return their ambassadors to their posts. U.S. Ambassador John Sullivan and Russian Ambassador Anatoly Antonov returned home earlier this year amid worsening U.S.-Russia relations. Both of them participated in the P+5 part of the summit.

According to a White House official, the summit ended at 5.05 CEST Wednesday when the P+5 expanded bilateral between the two delegations concluded. The P+5 on the American side included five high-level officials in addition to Biden and Secretary of State Antony Blinken. The session was concluded after one bilateral meeting, according to the official, not two as was previously scheduled.

Putin also said that both sides will begin consultations on strategic stability and cybersecurity, noting that as nuclear powers, the U.S. and Russia have a special responsibility to maintain relations.

The issue of Ukraine's ascension to the North Atlantic Treaty Organization and Putin critic Alexey Navalny seem to be the sticking points.

"This man knew that he was breaking the law of Russia. He has been twice convicted," Putin said of Navalny, keeping his habit not to say the opposition activist's name aloud.

Repeating Russia's official position, Putin said Navalny had violated bail conditions last year by going abroad while unconscious after an apparent Novichok poisoning and failing to check in with Russian officials as required.

The two leaders discussed Ukraine, Putin said, but as far as Kyiv joining NATO, the Russian president added, "I don't think there is anything to discuss there."

Following Biden's summit with NATO leaders Monday, Ukrainian President Volodymyr Zelenskiy tweeted that NATO agreed that his country could join the alliance, causing some analysts to speculate that Putin might cancel his Wednesday summit with Biden.

Asked during his press conference at the end of his summit on whether Ukraine should join NATO, Biden said, "It depends on whether they meet the criteria."

But Biden defended Ukraine against Russia. "We will do all that we can to put Ukraine in the position to be able to continue to resist Russian physical aggression," he said.

Putin said Biden did not invite him to Washington but said that he and Biden spoke "the same language." For that they don't "need to peek into each other's soul and swear eternal love," he said.

The Kremlin put out a statement following Putin's press conference, noting that the "United States and Russia have demonstrated that, even in periods of tension, they are able to make progress on our shared goals of ensuring predictability in the strategic sphere, reducing the risk of armed conflicts and the threat of nuclear war."

Before their talks, the leaders thanked each other during the brief, and chaotic press opportunity at the beginning of their meeting where American and Russian media jostled each other.

"Mr. President, I'd like to thank you for your initiative to meet today. I know that you've been on a long journey," said Putin via an interpreter. "The U.S. and Russian relations have a lot of issues accumulated that require the highest-level meeting. And I hope that our meeting will be productive," he added.

Biden responded in kind. "Thank you," Biden said. "As I said outside, I think it's always better to meet face-to-face."

Both sides have been underscoring opportunities for cooperation but downplayed expectations for any improvement in tense relations between Moscow and Washington. The meeting was expected to be more of an airing of grievances than a platform to reach significant agreements.

The meeting concludes Biden's first trip abroad as president. During the past week, he attended the G-7 summit and held talks with NATO and European Union leaders, seeking to boost relations with allies and consult with them about the U.S.-Russia talks.

In May, two key U.S. businesses - Colonial Pipeline, which transports fuel in the southeastern United States, and the JBS meat production company - were targeted in cyberattacks believed to have originated in Russia. Both Colonial and JBS paid millions of dollars in ransom to restore their business operations, although U.S. law enforcement officials have recovered more than half of the money Colonial paid.