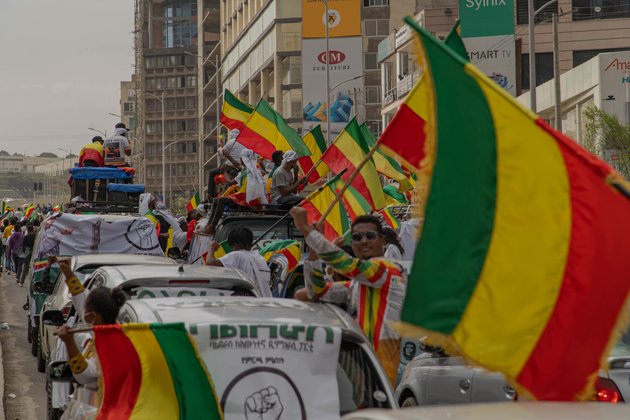 ADDIS ABABA, ETHIOPIA - Passersby called the raucous campaigns this week in Addis Ababa "beautiful," with many noting they had never seen political discourse like this before in Ethiopia.

"Life has gotten expensive, and people have died in violence, but I hope elections can make this right," said Melat Tesfaye, a 29-year-old mother of two, on a busy street in Ethiopia's capital. "Opposition parties are campaigning freely, and we have hope for a democratic country."

Voters are preparing to cast ballots on Monday in what will be Ethiopian Prime Minister Abiy Ahmed's first electoral test since he took office in 2018. The campaign ended Wednesday, with reports of unprecedented free expression, campaign suppression in some areas, and one region at war that won't vote at all.

A supporter of one of the opposition parties takes part in a rally on the last day of the campaign for upcoming national elections in Addis Ababa, Ethiopia, June 16, 2021. (VOA/Yan Boechat)

More than 9,000 candidates from more than 40 parties are running in the national and regional parliamentary elections, according to the BBC. Winning parties within the bodies will then select leaders, including the prime minister.

Some candidates say economic and political development are primary issues for Ethiopian voters. The Ethiopian economy is growing, and the poverty rate is shrinking, but more than 23% of people still live below the poverty line.

Poverty has declined in recent years, but more than 20 percent of Ethiopians still live below the poverty line, pictured in Addis Ababa, June 17, 2021. (VOA/Yan Boechat)

Security is also a key issue, with an ongoing war in Tigray in the north and simmering conflicts in other areas. There is no election in all of Tigray, and many districts in other regions are postponing their votes until September because of a lack of security or, in some places, a lack of paper ballots.

"Among the most important is that we should have tranquility and peace prevailing in all parts of Ethiopia," said Tawfik Abdullahi, a former ambassador and orthopedic surgeon running for parliament with the ruling Prosperity Party.

The war in Tigray began in November after national elections scheduled for August 2020 were postponed because of the coronavirus pandemic. Tigray went forward with regional elections, which the federal government called illegal.

Violence ensued, and now thousands of people are dead, millions are displaced and tens of thousands have fled the country to camps in Sudan. United Nations officials say famine is already under way in parts of Tigray and neighboring regions.

Hundreds of thousands of other people are also in danger of starvation if aid organizations do not soon gain full access to the most hard-hit areas, according to the World Food Program.

The government has wrested control of most of the towns and cities from regional forces, but fighting continues amid reports of atrocities such as mass rapes and the slaughter of civilians, including children.

Some candidates in Addis Ababa say despite - or perhaps because of - the war and humanitarian crisis, elections need to go forward.

"I can understand the crisis, but we cannot stop in the meantime," said Yohannes Mekonnen, a parliamentary candidate for the Ethiopian Citizens for Social Justice Party, one of the main opposition parties.

"We should solve the problems. We should assist our people. We should address their problem. In the meantime ... the election should keep going, whatever the result," he said.

Some campaign repression has occurred, Mekonnen said, including forced closures of his party's offices and obstruction of its campaign rallies in areas where most people support the ruling party. As for safety on election day, "I cannot tell you what will happen," he said.

Addis Ababa residents receive instructions from the National Electoral Board of Ethiopia on how to vote on the upcoming elections, in Addis Ababa, June 16, 2021. (VOA/Yan Boechat)

While speaking at a rally at his hometown on Wednesday, Abiy said he was confident that the elections would be safe. "The whole world is saying we will fight," he said, according to Reuters. "But we will show them differently."

Earlier in the week he tweeted that the vote "will be the nation's first attempt at free & fair elections."

Abiy is expected to retain his post as prime minister after the vote, despite international and regional criticism over the conflict in Tigray. In 2019, Abiy received a Nobel Peace Prize for striking a peace deal that ended a 20-year stalemate with neighboring Eritrea and for democratizing Ethiopia.

A billboard for the ruling party, led by Prime Minister Abiy Ahmed, who is expected to retain his seat after the elections, is seen in Addis Ababa, Ethiopia, June 16, 2021. (VOA/Yan Boechat)

Some activists say Ethiopia has a history of overwhelming election victories for those already in power, but this ballot could be different.

"I don't think we'll ever go back to a system where we have 100% one political party in the parliament anymore," said Sehin Teferra, the founder and director of Setaweet, an Addis Ababa-based feminist organization. "So, in that sense, it is actually quite big."