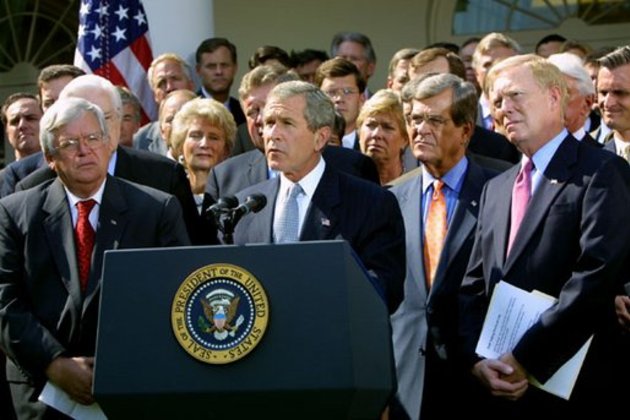 Goodbye to an AUMF

With the U.S. House voting and the U.S. Senate promising to vote on repealing an AUMF (Authorization for the Use of Military Force) from 2002 (essentially a sort of weasely pseudo-permission for President George W. Bush to decide on his own whether to attack and destroy Iraq in violation of the UN Charter and Kellogg-Briand Pact, among other laws), we could end up saying good-bye to a shameful piece of legislation. And without a replacement AUMF yet in place to justify new wars. This is all to the good, but . .

This is not Congress asserting its authority. This is Congress acting because the current president told it to.

This is not Congress repealing the 2001 AUMF that has been widely denouncd for its use as an excuse for horrific criminal wars for 20 years. That one is being conspicuously left in place.

This is not Congress ending a single war, not even the war on Yemen that both houses voted to end twice when they could count on a Trump veto, not the war on Afghanistan, not the war on Syria (or, as President Biden likes to call it, "Libya"). This is not Congress refusing yet more insane increases in military spending. This is not the prevention of so much as a single drone murder. In fact, no AUMF, not even the 2001 AUMF, has been among the claimed justifications for current wars for quite some time. Trump didn't rely on AUMFs and neither does Biden.

This "antiwar" action is a bit like failing to reform police or prisons or taxes or college costs or student loans or the minimum wage, and then making Juneteenth a holiday. It's window dressing. But it does highlight a certain danger, namely that the Congress plans to create a new AUMF, perhaps in the proper moment of fear and panic, prior to repealing the AUMF from 2001. Here are six reasons that's a bad idea. Feel free to find five of these reasons crazy. Any one of them should be sufficient alone.

We've just seen a meeting of President Biden and Russian President Vladimir Putin, at which the major advocates for hostility and war were all members of the U.S. media. We can expect the U.S. media to clamor for a new AUMF precisely because of the hostility generated by the U.S. media toward Russia, China, Iran, North Korea, Venezuela, and - lest we forget! - UFOs. But this is a far more dangerous, not better, moment in which to create such a dangerous document than was 2001.