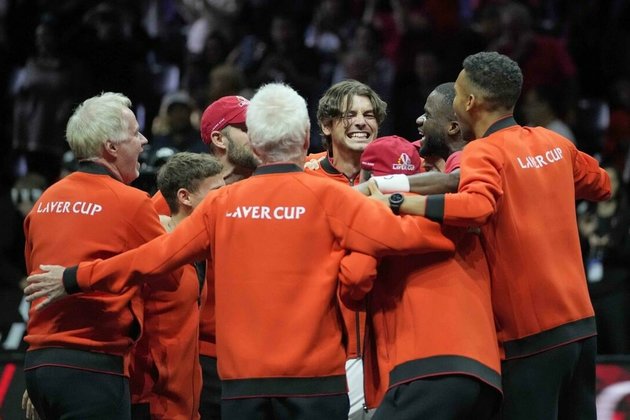 Jack Sock, Felix Auger-Aliassime and Frances Tiafoe produced stellar performances at the Laver Cup on Sunday to deprive Roger Federer of a victorious goodbye to his multi-garlanded career.

John McEnroe's Team World players won three consecutive matches to reach the 13-point threshold and claim the trophy for the first time at their fifth attempt.

"We've been beaten up a couple of times," said McEnroe who has skippered Team World since the inception in 2017 of the intercontinental team event. "But we kept battling ... it feels awesome."

On the first day of competition, McEnroe sent out Sock and Tiafoe in the doubles against Federer and Rafael Nadal with the express mission of raining all over Federer's final match on the senior tour.

His duo executed his orders with extreme prejudice to ensure his squad and Team Europe were tied at two poitns apiece.

But on Saturday, with victories worth two points, Team Europe surged into an 8-4 lead at the end of the four matches.

However on the final day - with wins given three points - Team Europe went into meltdown following an electrifying start.

In the opening doubles match Andy Murray and Matteo Berrettini claimed the first set 6-2 against Auger-Aliassime and Sock.

But the Canadian and the American duo responded brilliantly to that 29 minute opening set demolition.

They took the opening service game of Berrettini in the second set and surged into a 3-0 lead. They held on to win 6-3 and set up a 10-point third set decider.

A Murray blunder at the net offered up the match point at 9-8 and Sock's slick backhand angled volley sealed the tie.

Team World's victory meant that the lead was cut to one point at 8-7.

Following a win in the singles and doubles on Saturday, the former world number one Novak Djokovic went into his match against Auger-Aliassime as the slight favourite.

But the Serb - suffering from a sore wrist - went down in straight sets to allow Team World to move 10-8 ahead.

"It was one of my best wins so far," said Auger-Aliassime after his first victory over Djokovic.

The 22-year-old's heroics gave Tiafoe the chance to win the crown in his match against Stefanos Tsitsipas.

After the 24-year-old Greek swept through the opening set 6-1, Tiafoe dug in and took the second set to a tiebreak where he saved four match points before converting his third set point to send the match into a 10-point shootout.

He edged that 10-8 to cap a remarkable comeback. competition.

"Seeing what Felix and Jack did, I felt it was time to get the win and I'm happy I got over the line," said Tiafoe.

They will also highlight the competition as the venue for the last hurrah of Federer.

The 41-year-old Swiss announced in the prelude to the event at the 02 Arena in south east London that it would be the last competitive tournament of his 24-year career.

That immediately generated a buzz around the occasion and it became a frenzy once it was known he would partner Nadal in the doubles for swan song.

Their combined brilliance almost made it the perfect send-off on the court.

Federer served at match point up in the final set tiebreak but - after more than a year away from the circuit - the killer edge had been eroded.

The loss soon became an irrelevance. Tears and tributes flowed for the man who effectively reconfigured the sport.

"I honestly think he took tennis to the next level," said Matteo Berrettini.

The Italian added: "His rivalry with Rafa and Novak probably took tennis into the houses of people who probably never watched tennis before."

The Swiss grew from geeky looking whizzkid into an urbane international ambassador.

The 24-year-old American added: "He was world number one when I was eight-years-old and the realization that this was it ... everyone was super emotional.

"Roger was crying and he came over to the Team World and hugged all of us ... and to see him crying I hugged him and said: 'Thank you; Thanks for everything.' That got me. It was pretty tough to not be crying."

"The tennis was great and there were close matches. Roger has stepped away from tennis and we're sad about that but we all had a good time."