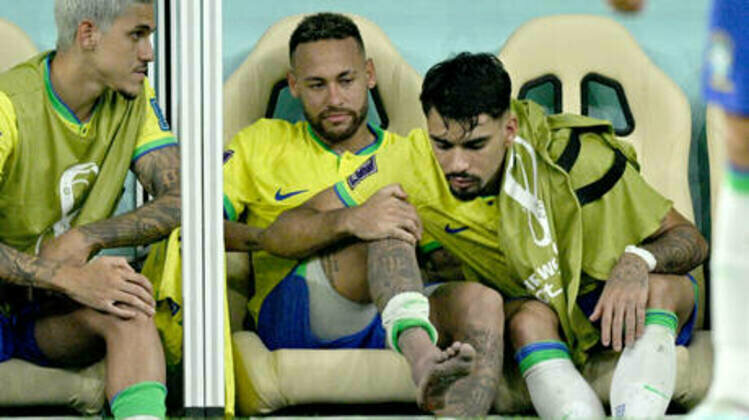 The star came off during his team's opening match against Serbia

Neymar will definitely miss Brazil's next World Cup match and could be absent from the team's third group-stage game in Qatar as well, according to reports.

The forward was forced off in the 80th minute of Brazil's opening 2-0 win against Serbia on Thursday after suffering a right ankle injury.

Team doctor Rodrigo Lasmar said on Friday that Neymar and defender Danilo had undergone scans and would both miss the Group G encounter with Switzerland on Monday.

"Neymar and Danilo went through an MRI on Friday afternoon and we found ligament damage in the ankle of both of them," said Lasmar.

"They will miss the next game for sure and we will be cautious as they will undergo treatment in order to try to get them in shape so they can play again in the World Cup."

According to Reuters, Neymar will also be ruled out of Brazil's third group-stage game against Cameroon on Friday.

That means the star faces a race to be fit for the knockout stages, should Brazil qualify as expected.

The 30-year-old, who has already indicated this will be his last World Cup, shared a social media message to assure fans he would do "everything possible" to feature again in Qatar.

"Nothing in my life came easy and I've always had to work for my dreams and goals. I have never wished anyone anything bad and always helped who needed," wrote the Paris Saint-Germain striker.

"I'm injured, yes it's not nice, it will hurt but I'm sure I will have the chance to come back because I'll do everything possible to help my country, my team-mates and myself."

Neymar has suffered World Cup injury agony before, missing the semifinal against Germany on home soil in 2014 after fracturing a vertebra in the quarterfinal against Colombia.

Five-time World Cup winners Brazil earned an opening win against Serbia in Qatar thanks to a second-half double from Tottenham Hotspur winger Richarlison - the second of which was an acrobatic contender for goal of the tournament.

Tite's team are among the favorites in Qatar and are on a 16-match unbeaten run.