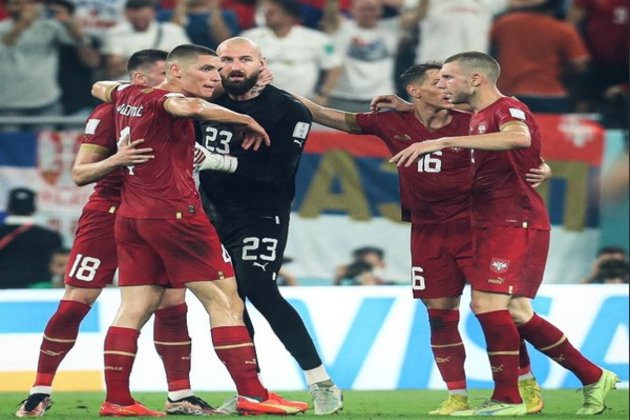 Doha [Qatar], December 3 (ANI): Serbia manager Dragan Stojkovic cited the team's defence as the reason for the loss against Switzerland in the last match of its group stage.

Stojkovic said that the team's fragile defence may be targeted after the loss but the players must keep their heads high as they attack and defend together as a team.

"It goes without saying that we had problems in defence, but this would have to undergo a deeper analysis. I shook the players' hands and said they must keep their heads up. They really did their best and gave their maximum. When you lose the game, of course we think about (mistakes made by) the defensive line, but we defend and attack as a team," explained the Serbian manager.

He talked about the mistakes of his team's defence and said that such shortcomings are forbidden at the World Cup stage.

"We reversed it after 0-1 to make it 2-1, but again we didn't play well defensively. It was so easy for the Swiss to score the second goal, which was really shocking for us. Psychologically, it was very positive for the Swiss. These kinds of things at this level of play are forbidden. If you repeat these mistakes, it is very difficult to win. In the future we must work hard and do everything to resolve the problem," stated Stojkovic.

Stojkovic also talked about losing key players to injuries and said that the absence of pivotal players barred them from delivering their best.

"We came here with a lot of niggles and injuries to our key players. This was very difficult to manage, it was difficult to have a high level of performance at a World Cup. Of course there was a period over the last one and a half years where we had a successful streak but now we faced a dip (in form)," shared the manager.

Switzerland defeated Serbia 3-2 in an electric encounter on Friday to finish second in Group G and advance to the World Cup knockout round at Stadium 974 on Saturday.

The Swiss team made it to the knockout stage for the third time in a row and will now lock horns with Portugal in the round of 16 clashes on December 7.

Xherdan Shaqiri gave Switzerland the lead in a match that ebbed and flowed at lightning speed in the first half at Stadium 974, but Serbia quickly scored twice within 10 minutes through Aleksandar Mitrovic and Dusan Vlahovic to turn the game around.

Just before the end of the first half, Breel Embolo gave the contest another twist by bringing Switzerland to parity. Remo Freuler then scored three minutes into the second half to give Switzerland a one-goal lead yet again. (ANI)